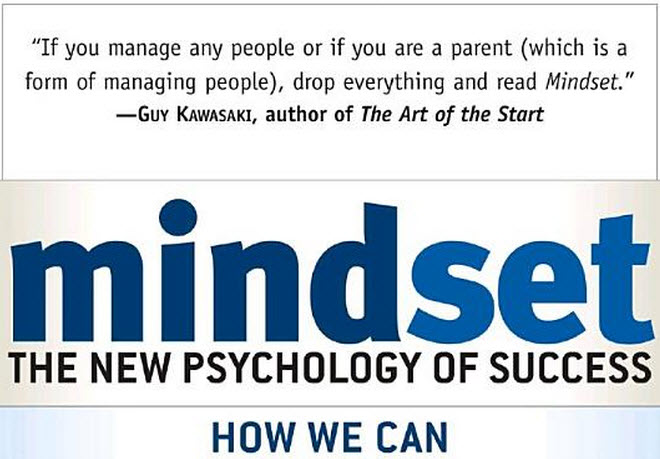 You think to yourself, it would be nice to be able to play an instrument, talk a foreign language, create a work of art and so on.

But something stops you, the idea that you wouldn’t be very good at it. Indeed, you know you would not. You’re not smart enough, pretty enough or talented enough.

It’s right here that the problem lies and why you don’t succeed. But it’s also the same place where you can find the solution.

So says Carol Dweck in her book Mindset, The New Psychology of Success.

The attitudes and beliefs we have affect the choices we make every day. Those beliefs can limit our potential or unlock it. It is the basis for excellence or mediocrity.

It comes down to what we think about ourselves and our skills.

Outlined in the book are two paradgims, each of which leads us to behave in certain ways.

In this mindset you believe that your abilities and potential are set in stone.

Levels of attractiveness, creativity, intelligence are defined at birth and there is nothing that can be done about it. Any success that does happen can be explained away as chance, or we have a natural talent for it.

What this belief does is create an urgency to prove yourself, because you never feel as though you’re good enough. People might find out you are lacking in skills or intellect, so you need to show yourself as being good, even perfect.

Mistakes are just as worse because they show of lack of skill, so you avoid making an effort. Easy tasks are chosen because with their success it validates your skill, a difficult task is risky in this respect.

In brain studies people with a fixed mindset where only were interested in feedback that reflected upon their own abilities. But had no interest in information that could help them learn.

In this mindset, effort is what makes you smarter, better.

Here it is understood that the hand you are dealt with is just the starting point. Basic qualities are something you can cultivate through effort. A persons true potential is unknown and unknowable.

‘A passion for stretching yourself and sticking to it even (or especially) when its not going well, is the hallmark of the growth mindset.’

Research shows that how people view effort, risk and challenge come from their mindset, fixed or growth.

In a growth mindset we see ourselves, our characteristics, and potential as changeable through effort. Although we differ in skills and aptitudes, through diligence and practice we can grow and develop those skills.

If you say to yourself, ‘I am poor at maths’, what are you saying? That your talent for it can’t get any better? That’s a fixed belief.

It goes back to the debate about nature and nurture, whether our talent is innate or cultivated.

Also you can have different mindsets for different subjects. You might think you have the ability to grow one skill or aptitude, but another skill you feel remains fixed. So we have a complex mix of beliefs about how well we can do.

Why are such beliefs important? As Dweck explains, because it affects our behaviour and the emotion behind it. A fixed mindset leads to feelings of insecurity, and the need to prove ourselves. Criticism is seen as a personal attack.

With a growth mindset you see yourself as a work-in-progress, grasping opportunities to learn and grow. Criticism is seen as an opportunity to learn through feedback.

One true test of a mindset is in how you deal with obstacles that prevent you from getting what you want. What you do when you come to one, or when things are not going as well as you had hoped? Do you stick with it or give up?

It all comes from our ego. Those with a growth mindset see themselves a more resilient, where as those who are fixed tend to be more fragile in the area of self esteem.

In relationships a fixed mindset means we put others upon a pedestal. To make them feel perfect, worship them, enshrine their fixed qualities. Total uncritical acceptance. For a growth we see their faults, and offer to help them, challenge them to become a better person, encourage them to try new things, foster development.

In business, people with the growth mindset see challenge, as a means to growth. For the fixed mindset, you must look smart, talented, be flawless and straight away.

“People with a fixed mindset expect ability to show up on its own, before any learning takes place.”

School tests don’t measure how smart you are or could become. But those with a fixed mindset do believe this. It becomes more about passing exams than working hard and learning.

It leads to the need for constant validation. The self esteem movement seems to encourage this kind of superiority, and self absorption. Constant affirmations, and positive thinking about yourself may be harmless, but when ‘special’ start to become ‘better than others’, then it can turn into narcissism and arrogance.

The true meaning of failure

The Growth mindset allows for a more accurate self assessment. If you’re orientated towards learning, accurate information is a necessity. A growth mindset leads to a love of challenge, belief in effort, resilience against setbacks, and greater success.
A growth mindset thinks qualities can be learned, so it creates a passion for learning. It also allows you to better adapt yourself, and face the unexpected challenges that befall us.

How we face setbacks and failure in life can define whether we succeed or not.

In the fixed mindset, failure, is not just something that happened, but something that implies identity. Your own sense of self is involved. Using failure as means to measure and define yourself. You get caught up in thinking that because you failed, you are a failure.

That’s the mistake. You have made your circumstances create your fixed identity.

In a growth mindset, failure is just as painful, but it doesn’t define you.

It’s mistaking weather for climate. Thinking that because its raining now does not mean that the climate is wet. The same is with failure. Thinking that because you fail does not make you a failure. You have mistaken a temporary event for a permanent feature.
To grow and develop ourselves we need a mindset that mirrors this idea. We are not fixed individuals, our brains can alter their structure, developing new connections and removing others. Just as our minds can adopt new habits and leave behind old ones.

It’s now clear that the right attitude is more important than knowledge when it come to success.

For more ideas on success and achievement subscribe to my newsletter.