Home » Philosophy » Do we have Free Will, or Free Won’t? 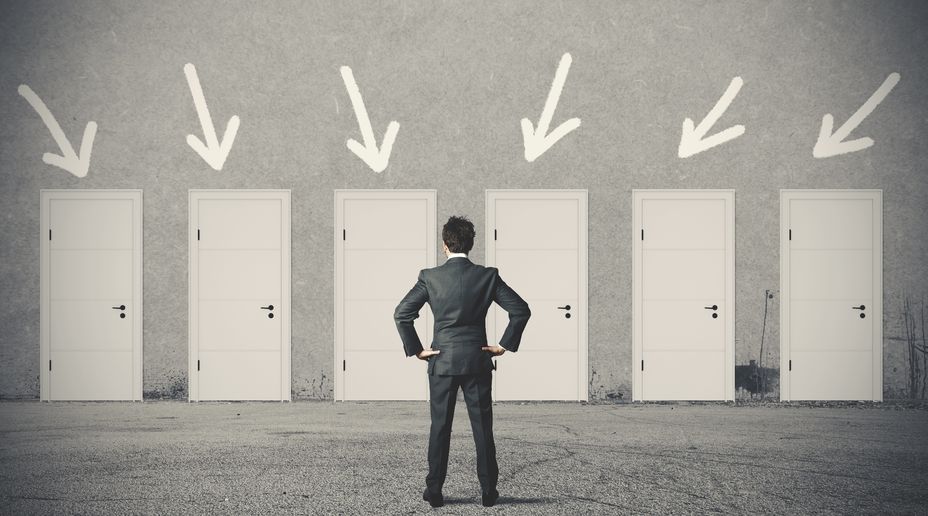 In our day-to-day experience, we appear to be making things happen through the choices and decisions we make.

However, when we look closer it becomes far more difficult to support the idea that we make choices independent of outside influences.

The findings of neuroscience have shown free will or may be nothing more than an illusion.

In Thinking Fast and Slow, Daniel Kahneman illustrates two pathways or systems we use. One is ‘Fast, automatic, frequent, emotional, stereotypic, unconscious’, the other ‘Slow, effortful, infrequent, logical, calculating, conscious’

All the evidence points to the notion that free will doesn’t exist, we are more the puppets of circumstances.

However, it still doesn’t explain how I seem to be choosing one path over another and making something happen.

Instead, I’m more taken with the alternative idea of Free Won’t.

Impulses bubble up in our subconscious. We might even become aware of as they surface in our consciousness.

Most of the time we are not in control. We don’t choose to have our thoughts or feelings. They just happen as the result of outside exposure to causes and conditions.

When seeing the little green man at the crossing I walk, the red, I stay put.Another is reading a book, it generates ideas, my creativity, and desire to create arises.

Our minds are created through causes and conditions like everything else. The mind is a process, not a thing or a substance.

To go with the impulse, to not put go with a different impulse? It’s the question we face if we are self-aware enough.

I don’t hold with the idea of free will. So much of what does happen seems to just happen.

Free Won’t is the veto that such awareness gives us. Neuroscience is suggestive of this veto also. In our brains, it’s the Prefrontal Cortex(PFC) that plays a role in curbing our impulsive behaviour.

I don’t hold with the idea of free will. So much of what does happen seems to just happen. We don’t choose who we like and dislike our favourite art, music. Even meaning seems to just surface.

Our behaviour is mostly habitual, a routine. We brush our teeth because we walk into the bathroom, after breakfast, and it’s the morning.

Circumstance triggers behaviour, and that’s a good thing. Doing the right thing at the right time and doing it without thinking is often a lifesaver.

The alternative, ‘free willing’ everything is on inspection impossible.

If we had to choose to do everything then it would mean having to will our hearts to beat, glands to excrete hormones, neurons to fire. We would be spending all day just willing my body to work to keep on living.

Free will would create an odd circularity, I would have to think my neurons to fire to have a thought.

It’s not possible to free will all the time.

Another way to look at it is that we have an Autonomic Nervous System that takes care of things without conscious awareness. Respiration, heart, digestion, fight-or-flight, and more organised by this system.

It makes us more efficient and allows our attention to be on other things whilst all the necessary stuff like breathing, blood pumping goes on without us having to do anything.

Indeed consciousness can only happen if there is a subconscious.

Another example is learning. What is learning, what are we doing when we learn?

When learning something we are using our apparent will to practice skills, that also then become habitual and automatic. So our skills become unconscious too.

Once learned, the neural pathways create the habitual behaviour we want.  Expertise is created like this, through diligent practice we rewire our brains so that the skill become subconscious.

We don’t want to have to learn a skill each time we have to use it.

It’s like in a ‘Flow’ state. The ‘goal’ of learning you might say. Here our sense of self and time falls away and we act without thought, ‘in the moment’. Completely absorbed in the task we perform to our highest potential. It’s a state long known in some eastern religions like Buddhism and Taoism.

I don’t think there is any free will, the Buddhists and modern sciences say so. The issue is far from settled, but what’s clear is that a lot of the time we’re not making a choice, but acting on outside forces and circumstances.

However free will is still a useful concept to describe the human condition and the choices we have to make in light of Uncertainty and our limited knowledge. We can’t talk about ourselves and our lives without invoking the idea of a separate self and the choices we make. So it’s an illusion, but a useful one.

Also, I can’t but think we advocate free will because we all like to think, perhaps even need to feel as though we are in control. Even if it does appear to be illusory.

Free Won’t seems more likely, it accepts that for the most part we are not charge of our lives but here for a ride.

Ultimately the free will question is not a subject I’m deeply interested in. Like most people I am content to play with the rule as they appear to me not delve deeply into question I’m not sure even have answers. I’m not a Philosopher and don’t need to know the answer, assuming there even is one.

What’s important, as the Buddhists prescribe, is becoming more self-aware and noticing the impulses that arise. Then choosing to go with those desires or not. Like sailing on a ocean, going with the wind or tacking against it.

That way I get to live more intentionally, more aware.