Home » Culture and Society » The ‘Nones’ and Syncretism 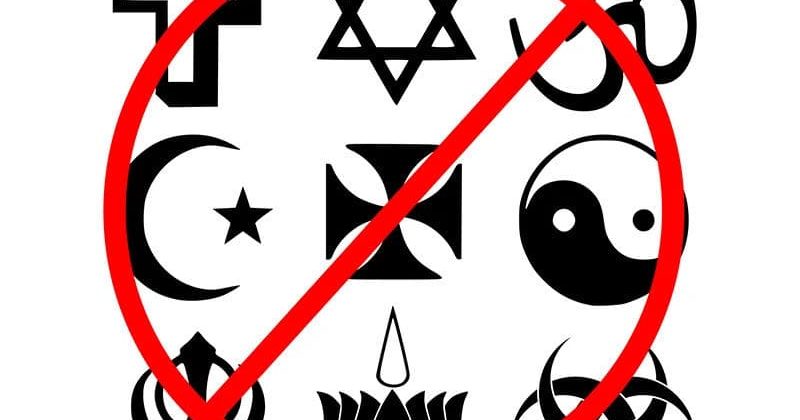 There is a rise of people who don’t identify with any religious creed. The ‘Nones’ as they are known, are a demographic that’s being talked about more in politics and religion, especially in America.

People are asking why this trend is taking place. Some answer those are giving up on God are reverting to sin, descending into nihilism etc. It misses the truth, a lack of religion is not a lack of beliefs. Religion is not the gatekeeper and curator of morality. You don’t have to be part of a religious organisation to act morally.

Religion seems more interested in power, not faith, truth, or compassion, and people are waking up to it. It’s the banner-waving, parade organising, flag-waving attitude people see as divisive, making the world an uncertain and violent place.

It’s Tribalistic attitude that’s turned religion into Metaphysical pissing contest. A provincialism that sorts the ‘haves and have nots’, those who will be saved or not. Ego has made truth and religion a competition.

I say the rise of the Nones more to do with letting go of such a ‘group egotism’, a poisonous attitude. But also another truth: no one religious label can capture the depth and complexity of their beliefs.

More and more of us are waking up to the increasing complexity of life. We can no longer be pigeon-holed into simple clear categories anymore.

People call themselves ‘nones’ because census questions squeeze ourselves into a category that are too confining. We answer non because we don’t fit into any of them. The question is framed to make it unanswerable.

What’s gong on here is no people giving up on spirituality, but the rise of Syncretism.

What happening with the rise of the ‘nones’ is people are cobbling together their own set of beliefs. Think of it as the IKEA way, ‘some assembled is required‘.

Syncretism is the borrowing or merging of different ideas from different traditions in one own spiritual quest. The internet has made many ideas available to us, a smorgasbord of beliefs and attitudes we can select from. It can be intimidating, but it’s also compelling, exciting. to make your religion your own.

Indeed this is how religions are formed including Christianity. People borrowing ideas from several places and making something new from them. The reshaping of narratives through their retelling.

There’s a parallel trend in professional life. No longer is there a job-for-life anymore. Instead, we will go through many trades and side-hustles through our professional life. Its been dubbed ‘Slash’ careers due to how we would write it. For example Banker/Artist/Youtuber or lawyer/chef.

We have now multiple careers to pursue, our lives have become complex in a way our language can’t simply capture. The ‘map is no longer sufficient to the terrain’ as it call it.

The ‘Nones’ haven’t given up on the important questions in life. They, or rather we, (as I count myself among them) are ‘spiritual, not religious‘.

What’s happening is the rise of the ‘Religion of One’. Today people are working out their philosophy, worldview or religion for themselves.

The rise of the Nones is not a sign something is wrong. But an indicator people are seeking solutions for themselves. Not merely accepting whatever beliefs are handed to them.

A small ditty I wrote about my own philosophical identity.

Those who follow no banner but march to the sound of their drum. These types, the outcasts, the bohemians, have always irritated those conformists and conservatives.

There have been many thinkers like this. But let’s ask the question, of Jesus or the Buddha, ‘what was their religion? You can’t pigeonhole them because they didn’t fit into a belief system of their time. Indeed Jesus, the Buddha rejected many of the beliefs of their time and found a path for themselves.
It’s how you can have Atheist Christians, Muslims doing yoga. Christians who do accept evolution.

It doesn’t mean the ‘nones’ aren’t spiritual; they care about such questions as humans have always had. But they can’t be defined, categorised by what’s on offer.