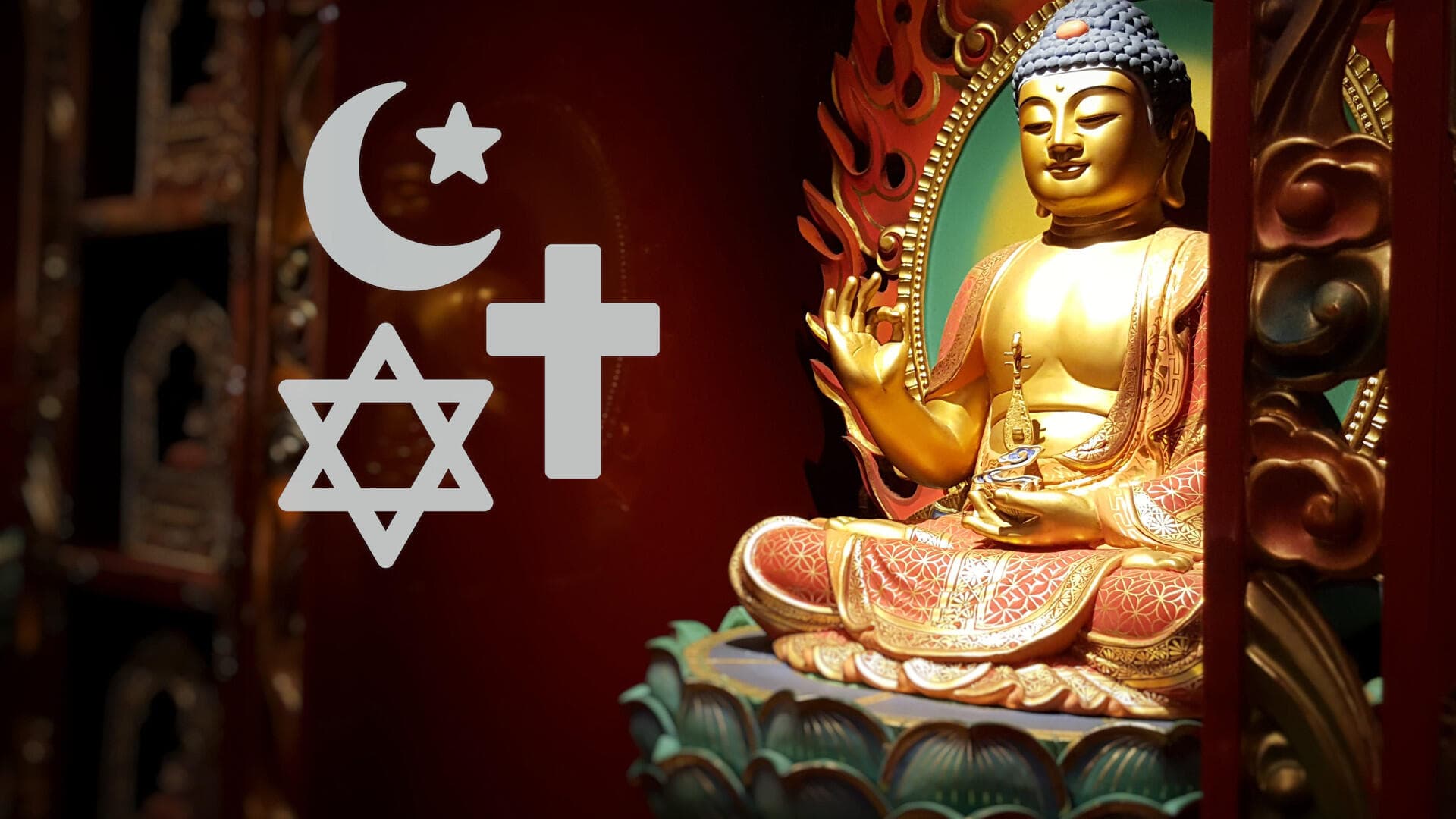 As a former atheist, now more a Buddhist, I have my views on this back and forth discussion between the Theist and the Atheist. My own views are informed by both Buddhism and Naturalism.

But if there is one thing I can put forwards first, Buddhism is the Elephant in the Room. It’s something both sides have heard of but rarely speak.

This polite silence is a shame because Buddhism has it’s own views on the topics of debate between theists and Atheists. Such as how to live well, what can we know, ethics and morality.

I feel Buddhism has a lot to say on all of these topics and it’s a voice that needs to be heard more often.

Before I go into details, I wanted to write about what strikes me about the overall tone and attitude of the debate itself.

Few debates today seem to create so much vitriol and antipathy as the debates of politics and religion. Groups are pitted against each other in an ideological battle for supremacy of people’s souls and lives.

As I look at the debate, I see it’s becoming a little stale, with the same talking points and arguments. The same ground is being raked over again and again.

There’s no aim here for cooperation, but more conflict. It may be because it’s an online debate, whereas out in the world, theists and atheists can and do get along. It’s the narrow vision of an online community, not representative of the world at large.

Whilst many theists can and do accord with science, many of the apologists online reject it, either outright or, more commonly, misrepresent it. They misunderstand what it’s for, how it works, and its conclsions—apologists often claim far more than what the science itself says.

What’s more infuriating than wading through all the misinformation and falsehoods before the debate can even start. As such, I have some sympathy with the Atheist side here.

Claims that science supports X metaphysical position fall flat because science is focused on the empirical. Therefore whatever is beyond the testable, measurable is unimportant. Science has no position on the existence of a god or other metaphysical claims.

There is no attribution to God or the supernatural in scientific papers, that a leap science doesn’t make. It’s like someone seeing a UFO and claiming aliens. No, the only thing that can be said about it is it’s flying, it’s an object, and it’s unknown. Anything further than that, and you’re the one making those claims not the science.

It’s no wonder atheists and sceptics think believers come across as dishonest.

The Sceptic part of me see so many of the arguments for theism and God are based upon a flawed reasoning. Either it involves biases that are unnoticed or assumptions unsupported.

For example, ‘The cosmos is either designed or random.’ Such false dichotomies show only how ignorant they are about science but also logic and reasoning.

More often than not it’s lazy thinking; a simple question doesn’t require a complex answer. So out of self-interest and avoiding hard work, the simple answer is proposed. This is where the psychology of the individual comes in, something I will get to later in this essay series.

Believers brush over whole swathes of philosophy and science because they don’t take the subject seriously enough to dig deeper ,or they don’t like it conclusions. What’s left is ill-informed believers claiming their opinions as facts.

The need for certainty and answers pushes their search towards answer the need to be true. They are claiming facts and certainty when better-educated minds see nuance and uncertainty.

What I find troubling about theists, or at least the apologetics I’ve come across, is their unwillingness to alter their beliefs in the face of counter-evidence or when experts point out their mistakes.

We expect doctors, hospitals, mechanics, plumbers to get better at what they do. Yet, many apologists are regurgitating the same ideas and arguments, some from decades, if not centuries ago.

Compare this with science; its method is to correct itself; showing the value of inquiry and doubt and putting truth before personal feelings. Knowing ourselves, the biases we’re subject to, and the fallacies we can fall into has allowed us to use better methods to search for answers.

History is littered with discarded ideas because we’ve learned to test them with better tools.

It’s not perfect, and progress is neither straight nor straightforward, but the ideas we have now are better than the ones we had before, and the same goes with the scientific method.

It’s claimed by believers that God can be proven to exist through logic. Firstly there is the not inconsiderable question of what it means to

Here are my doubts over the Free will argument for God. Automatic Behaviours First, we ignore that a lot of our behaviour is not through

The argument follows: there are so many arguments for God, and in the eyes of the theists, all the claims fit together; therefore, it must

Atheism-Theism – The Moral Argument for God

This argument says that transient or contingent change of the world requires a non contingent source, a bedrock or substrate. Every contingent thing has an

Atheism vs Theism – Design argument for God – The Watchmaker Metaphor

The design arguments are among the more popular non-scriptural arguments put forward by Theists. The cosmos had to have been designed by a designer, a

What’s often characteristic of many theists in their debate with non-believers is their faith in the ideas of Aristotle. Soon after Aristotle came, more thinkers

What seems to get lost in the Atheist-Teis debates is just how different the respective worldviews are. And more importantly, that change in the world