Home » Creativity, Work and Success » How do you change your life? One word is all you need 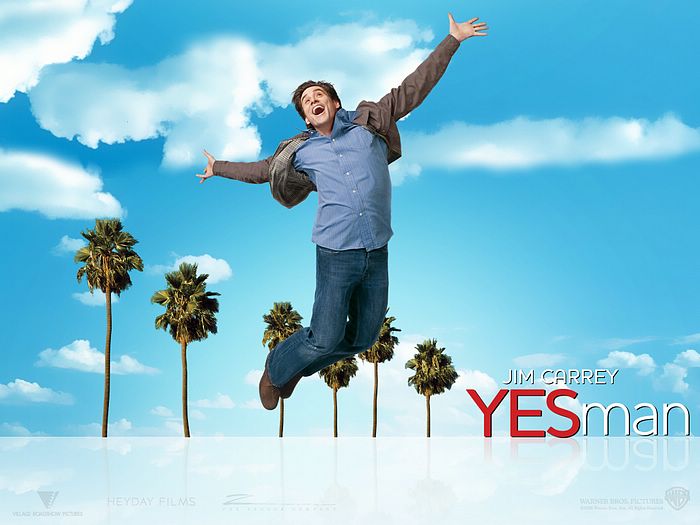 Don’t feel as though your life is interesting enough?

Feel as though you are missing out?

Many of us including myself come across stories of people who go on amazing adventures. They just seem to do a lot of things in their life. Whether it be sports, traveling around the world, art, or socialising. These people seem to do it all and do it often.

How do they do it, I wonder? Where do they get the courage, time and money to do all this?

We see these people and become demoralised. Envious of their amazing lives, and longing for the same ourselves. Worse still I find myself reluctant to talk to others because I feel I have little or nothing in my life worth speaking of.

It is the emptiness of a life not lived, and what we fear most of all.

Years ago I read the book Yes Man by Danny Wallace. More recently I watched the film and re-read the book.

I have enjoyed both immensely. It starts like it so often does in our lives. We feel something is missing, something is wrong.

Danny became aware of this problem in his life because it had become less interesting. He was staying at home more. Not having the fun and excitement of going out with his friends that he once had. He felt he was missing out on life and the opportunities that are offered up every day.

I have felt the same way about my own life on more than one occasion. That sinking feeling that there was something missing in my life would not go away.

Danny knew he needed to do something about it. Then he met a random stranger on a bus who would say something that changed his entire perspective.

As a result of this chance meeting he made a pact with himself, and a friend. Say Yes to Everything. That’s it. It’s a crazy at it sounds

The randomness of his life and the adventures he lead, I found to be funny, daft, cringe-worthy, touching, and insightful. But full of meaning. He tried things he never would have thought of doing Traveled more, received a promotion, found the love of his life and more.

The story may be real or fiction, and the film is different to the book, but I feel that does not matter, Because it looks at the attitude to life we have.

Yes is where things happen.

‘When you think about it, probably some of the best things that have ever happened to you in life, happened because you said Yes to something. Otherwise things just sort of stay the same.’

Saying Yes creates an openness in life. It means allowing yourself to embrace opportunities that life throws at you, but without knowing where they will lead or what will happen.

We can become stuck in our comfort zones. The daily patterns of thought and behaviour become so habitual that we cannot see beyond them. So we fail to grasp the opportunities that find us.
Trying new things, meeting new people, learning new knowledge. Yes is about embracing those opportunities for change.

‘Sometimes, inspiration comes in the strangest places. Sometimes, even the ordinary can be magical.’

In the book there is the idea that the man on the bus was and enlightened being. A spiritual individual call Maitreya who goes around helping people. Personally I doubt such things. I think it was just a guy on a bus. But that does not matter.

Insight can come from any where and anyone. Higher beings don’t need to exist. We can learn from each other, a word, a speech, an idea. We grow and learn together.

I think it is the purpose of the human race to figure out the truth. It is not necessary for it to be handed to us by others.

Another problem is our need for control

‘Choose to be Okay’

Now why did I not think of that? Would that work?

This is a phrase he mentioned that really struck home. The fear, doubt, the stress we come under as we try new things can be so upsetting that it prevents trying again. So we don’t learn, don’t have new experiences and end up stuck in life.

We cling to our routines almost as if our life depended on it.

Not knowing what will happen can make me so anxious, because I doubt my own capacity to cope with whatever comes my way. Making risky choices seems only to be choosing anxiety.

His ideas is to be okay with all those feelings. To accept them, realise you cant get rid of them and just keep moving forward.

I don’t think it’s about ignoring your emotions or just pretending to feel better. But more the acceptance that you are upset, instead of worrying about being so. Having a certain comfort in feeling that fear and doubt.

I think a lot of our worries come from being troubled by our own feelings and thoughts. Here you choose not to be.

One yes can take you to an amazing place. But those Yes’s that he was building lead him to an even and greater adventure.

As he explains in the book, for him it began with that man on the bus, then he said Yes to time with strangers. Yes to travel, and a new job opportunity.

All those Yes’s built up until his life has been transformed. If he had said No at one point that may not have happened.

It’s the complex nature of life, our decisions interact with each other in ways you never imagined. Building something together step by step that is far more than it individual parts.

The pain of regret

This is perhaps one of the worst things to live with because it is always with us. The feeling of lost time, of missed opportunities.

If you did something wrong, at least you tried, mistakes are made and we learn. But at least you will have a story to tell (see Worth Remembering below).

It’s harder to learn from something we have not tried. We cannot know because it did not happen so there was no opportunity to grow.

Life he thought, is a lot about finding and exploring. But most of all its about our connection to other people. Such experiences seem better when shared.

Doing something new does not seem quite so scary when you have a friends along to help you.

I feel an experience shared is worth far more. You enjoy each others company, but also you enjoy. their enjoyment of it. You can see you friends, partner, child or parent come to life with energy, fascination, and joy.

Such moments of connection can mean so much to us. Worse still we would miss them if we didn’t have them in our lives. We would and do feel lonely.

As he said it in the book. His life had nothing in it worth remembering. Nothing of note to tell someone else in his life.

This is how I felt when I first read the book. It’s important because at the end of your days it will only be the memories you have left.

Positive thought is no substitute for Positive action. The whole positive thinking field I found rather dubious because just thinking happy thoughts doesn’t make you happy. A change in environment is needed.

Becoming a Yes Man is taking up opportunities to make memories. It’s a risk because not all memories will turn out to be good.

Danny briefly tried saying No to everything for a day. At first it felt great, a feeling of power being able to say no to things you really don’t want to do.

He then listed down everything he had said Yes and No to recently.

But he noticed something after looking at his diary. Nothing really happens when you say no. No achievements or events, the days mean nothing. Where as saying Yes makes things happen, his diary was full of entries.

However I feel that being a No Man does have its own advantages. It stops you from being cheated, hoodwinked or robbed. Plus all the others things that can go wrong when we become too trusting or fail to do due diligence on a new idea.

No is the voice of scepticism. The doubt we have about the world around us. It helps because we can be easily deceived. No can help prevent us from wasting time on ventures that have no chance of success, or where our thinking leads us astray.

No stops us from spreading ourselves to thin. As Danny himself discovered, spending a lot of time, money and energy in the things he said Yes to. Without No, we don’t own our life, it’s someone else’s.

Saying Yes too much leaves us overworked and tired. No allows us to conserve resources for those times when we really want to say Yes.

What we need of course is a balance between them. So we can say No to things that are distractions and diversions and say Yes to things that will help us grow and learn.

The trick of course is in telling the difference.

Yes Man is showing up this imbalance. We say No too many times, and to the wrong things.

Being a Yes Man

Being as Yes Man, or just saying Yes more means becoming more adventurous. It’s saying Yes to Life, new ideas and experiences, even suffering. Yes can lead you to discover new skills you never knew you had, live experiences you never thought possible, and even change the direction of your life.

‘Yes’ is bold, brazen and brave. It’s the voice of faith, hope and emotion. Where as No is the voice of doubt, reason and scepticism.

It’s courageous because it often means facing your fears, the greatest of which is the unknown.

Is about surrendering the need for total control and certainty in your own life, loosening your death grip.

By using Yes we let in the unusual and uncertain, the chaotic and mysterious. Because of this as Danny found out, life becomes more interesting and random without an obvious purpose or objective.

Yet perhaps we should have more faith in this randomness, that it will take us where we need to go. For Danny it resulted in amazing experiences and he did find meaning.

It’s about trying something new without any certainty that you will like it or it will work. But knowing that the effort must be made if you want to live a more varied and interesting life.

The lesson here is take a few more risks in life by saying Yes to more things. You never know where you might end up, and the not knowing is what makes it so interesting.

The result a life more filler and richer than the life we can find ourselves in.

I still would not say Yes to everything like he does, such a practice seems to stressful for me.
But getting the life we want will only happen one way…..

For more ideas on scaring yourself sh*tless by saying Yes subscribe to my newsletter.