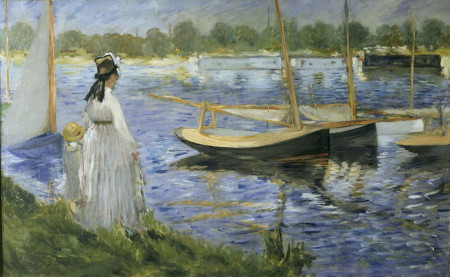 With my new interest in art and becoming an artist I have looked at a lot of art online. However looking at art on screen doesn’t reveal any details our insights into how that artist worked.

So I recently decided to start visiting art galleries in order to see the work up close and learn what I can.

The first of these is the Courtauld Gallery in Somerset House by the Thames. It specialises in Impressionist works. Below are some of the insights and notes I picked up whilst visiting.

Trees have been the study of artist for many years. This exhibit infused a number of artists who focused in drawing then.

What I noticed here was the different ways of approaching this difficult subject. The medium could be graphite, chalk, pen and ink, or watercolour.

Another method was to use the roughness of the paper itself. By drybrushing ink over the surface it picks up only the ridges. Giving the suggestion of foliage and texture.

I happen to like ink line and wash drawings because they’re particularly striking due to the strong contrast and amazing detail.

What I found in some of the works of Reubens was visible brushwork. I was not expecting this from an artist before the Impressionists. I’ve always thought the old masters used glazes to get rid of the strokes.

Other works of his however are more subtle in their blending.

Some of Reuben’s sketches are interesting to because they show the roughness outlines, which is a style that I like.

Many paintings are done on wooden panels not canvas, something else I didn’t know.

I also discovered a new artist I had never heard of. Giovanni Battista Teipolo.

I liked his work, such a the Allegory of the Power of Eloquence because it tells a story.

Seeing the works of some of the famous artist I had read about was quite a thrill. It also shows that the Impressionists/Post Impressionists were quite different in how they created their art.

Seurat’s work comes across as carefully constructed, defined and laid out in a almost graphic designed manner. Similar to Egyptian tomb paintings, which he used a inspiration. It’s a collection of motifs, icons gathered together. Forms and shapes. As if it was a advertising poster. There’s a rigidity to the painting, very unlike the other artists such as of Monet that seem to shimmer and move.

The closeup reveals the Pointillist technique of using dots on unmixed colour.

One of his paintings is far more abstract than others. Surprisingly he even leaves some of the canvas blank. No wonder he’s seen by some as the founder for modern 20th century art.

He broke a number of rules and went further than other, earlier impressionists.

The above painting by Manet shows us well the strokes that made the Impressionist style at least in part so controversial and new.

Rapid, short, choppy brushwork. Most noticeable in the water below the boat.

This work shows that Picasso started of very different from where he ended up with his art. Obviously influenced by the Impressionists.

Showing a city full of activity and life. What I like about this is the raised viewpoint, looking down on the scene. He painted it from a hotel room at the time.

This was the first of I hope many gallery visits. For more insights subscribe to this blog.