Home » Philosophy » There and back again: Romantic vs Classical thought 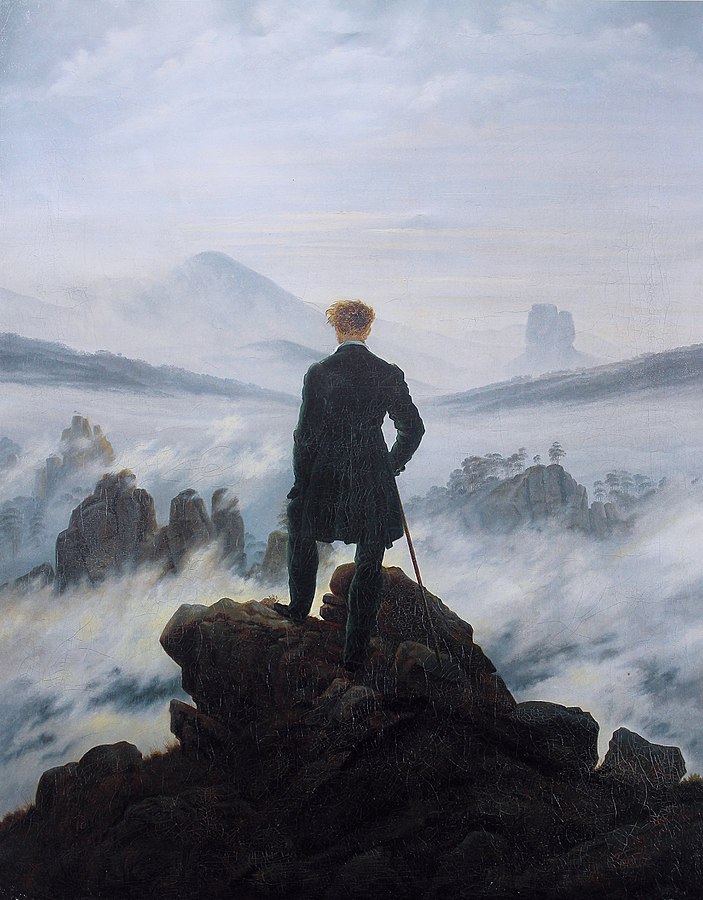 Looking back at my journey, trying to deal with the anxiety and fear that held me back, I can see a pattern or path between two forces or worldviews in my life. That of Passion and Reason, or as I will describe here Romantic and Classical attitudes towards life.

But what are these two drives that seem to pull me in different directions?

I will outline my path and then go onto describe something about these two attitudes and why they are both important.

I’m was something of a romantic in my youth. I grew up with Star Wars as inspiration, of Joseph Campbell’s Hero’s Journey. Even though I didn’t know what it was back then. Other stories like Star Trek, Babylon 5, Raymond E Feist’s Novels of Midkemia also have become part of my backstory.

All have the same format that Campbell laid out. Of heroes, battles, good vs evil and getting the girl.

A life lived passionately: Implacable enemies, facing your fears, a worthy cause, and fighting the good fight. I lapped it all up.

It sounds absurd now but it’s how I felt back then and still do in a lesser way.

My romantic side is but a part of me, but there is this newer part, that’s not so young and naive.

As I have grown I’ve come to see the flaws in such thinking, A childlike idealism in a world that’s full of complexity and nuance. Since then I have adopted a more rational attitude. Looking at psychological biases and fallacies. It’s been a fascinating mission to learn how our minds work.

However a few years ago I noted that it wasn’t making my life much better. I was living, but not feeling alive. Knowledge and reason are good, useful, but lacking in joy, passion, fun, and laughter.

So I have found myself walking back towards the passions of my youth, but this time, tempered with the wisdom of years.

The journey back happened because filling my head with knowledge didn’t work.

All that reading can’t eliminate uncertainty and insecurity, doubt will always remain. So to live a good life, I had to learn that I needed to take action, even with my fears and doubts. Because it’s the only way to grow and learn. It’s been a hard lesson, but a rewarding one.

As an aside, this journey back to passion from a joyless intellectual I found in the book Steppenwolf by Herman Hesse. About a man who intellectual and scholarly,  lives a seemingly joyless life, yet rediscovers passion and fun.

Here then is the path back towards passion. To fill life up with emotion again after rejecting it. It’s why I have turned to art, writing and taking more risks.

I enjoy my emotions more now that I understand them better, and can cope better with them. My romantic side is strongly felt.

I have found a middle way where I can hold emotion in without being paralysed by it or feel the need to run from it.

But it has not been a rejection of reason the path , I can’t go fully back. I’m now more centred, more somewhere in the middle, because I can see the merits and flaws of both viewpoints.

I’m gradually finding a groove that works for me.

So what are these two worldviews that have pay their part?

Through both exuberant of youth, older thoughtfulness, now towards a balance of both.

The Romantic and the Classical, The Idealist and the Realist. Each one sees the world differently.

Romanticism is a movement in the arts, literature, music and intellectual discourse that took place in the late 18 century that places its emphasis of human life on emotion, the individual, glorification of past and the future, and the Medieval period, not the Classical.

It was a rejection of the increasingly secular and rational society as it modernised.

Emotion and intuition are emphasised in a big way, with intense feelings in particular. Awe, terror, passion, ecstasy,. Nature is seen as an embodiment of a purer existence un-corrupted by humanity.

Frankness and plain speaking are seen as virtues. Taking a stand against the established order and institutions is seen as necessary. Romantics then are idealists. They see the world as it could be. The world they see now fills them with dissatisfaction, even anger compared to the vision of what could be. Injustice, nuance, compromise, timidity are obstacles that only get in the way of a better world. Wars get started, revolutions happen because change can’t wait.

The thought is there’s a better world out there to be created only if we are willing to take action to get it. They are not with the slow evolutionary process of gradual change but think that bold action can create this utopia in a much shorter space of time.

Winning is important at that’s the only way to rid the world of unwanted ideas, people, influences because the ultimate aim is purity and perfection. It’s different for the classic view which values a more nuanced attitude.

Romantics look upon the reason and analysis with suspicion, thinking it as dehumanising drive the turns people into cogs in a machine. They are also dubious that science can provide all the answers.

Romantics are essentially a follower of their gut intuition. There’s a biological basis for this too. Without emotion, we can’t make decisions. Neuroscientist Antonio Damasio in his book Descartes Error describes an individual who suffered brain damage that rendered him unable to feel any emotion.

This individual could describe the facts of different choices, but he was unable to choose because he couldn’t decide what mattered to him the most. He was paralysed by his lack of emotion. The upshot is facts and reason don’t get us to decide which option to choose.

Romantics also value the rare, beautiful, and out of the ordinary. They don’t hold with the classical ideas the routine and the everyday are worth having. They want heroism, excitement ad adventure to end the boredom and monotony.

The Classical outlook is different. It’s called Classical because it dates back to ancient Greece.

Socrates, Plato and other philosophers touted the ideas of reason and rationality to move towards a better world. (An example was Plato who was no fan of poets or poetry, explaining philosophy as the superior discipline).

The classical outlook is suspicious of the romantics’ high ideals because they have a downside.

The truth us people die in wars, things get destroyed. They see that people are subject to strong desires and without restraint, such impulses can get people, countries into trouble.

Things could be far worse they understand and instead advocate patience and a careful measured process of gradual change over time.

Revolutions they see can be hijacked by extremists and propelled to even more fundamentalist attitudes that bring forth shocking violence and suffering.

Romanticism has the problem in that it’s divorced from reality. It reveals our hopes and aspirations. Yet those same hopes can get us into trouble because they operate with a twisted idea of how the world works. It takes no account of nuance in life and the necessity of compromise to get anything done. ‘Quixotic’ is a term that describes this kind of pursuit of perfect or ideal notions without and understating of the practicalities involved.

A rational attitude is more down to earth. Rationality and analysis help us see these illusions and distractions, and prevent us from chasing everything.

Social order is respected, and being polite is seen as the way to maintain harmony in society. Unlike the outspokenness of the romantics.

Many people long for the good old days when things were better. Yet closer examination reveals that idea to be hopelessly biased. We only remember the good stuff and tend to forget the bad. The good old days are worse when we take of the of ‘rose tinted spectacles’ we look back at the past with.

The classical outlook searches for the underlying rules of reality. It seeks to find how the cosmos works without human perspective.

As for everyday life, a routine and discipline are seen as a way to cope with the uncertainty and chaos that creeps in. Routine and habits are the building blocks of a good life because they provide solidity and safety to existence.

Extremes, and the middle way

We can either lean forwards, headlong, experiencing the passion, fear, anxiety, joy, love, suffering, and living life to the full. But such feelings can be overwhelming, upsetting.

Or we can sit back analyse, categorise, plan, dismantle, conceptualise, and model. To find patterns and truths because intuitions can be wrong.

These two ways of looking at the world are both in conflict with each other, yet they compliment each other. The extreme of one can be countered by the use for the other.

The best path then is a more balanced approach towards life.

When it comes to solving problems romantics go with their gut. Classics go with reason. Romantic go with what feels right. Classics look at the evidence because they value clarity. Seeing things as they are not as we think they are.

Think of the two world views as Mr Spock and Dr McCoy. Two individuals who metaphorically sit upon the shoulders of Captain Kirk, advising him. McCoy, the voice of passion and feelings, Spock reason and logic.

Passion is what keeps us moving. It’s that feeling that it motivates us and provides the desire to get what we want, to become more than we are. Passion is what makes us feel most alive.

Really, Dr. McCoy. You must learn to govern your passions; they will be your undoing…

Reason is the tool we use to see reality and get stuff done, helping us to focus on what matters and what works.

Problems occur when we take these two drives to their extreme.

Passion without reason is scattered, directionless. It’s chasing after the next shiny thing.  Reason without passion is indecisive and stagnates.

I had to take the journey through both of these attitudes, to see the benefits and flaws of both. Yet over time, we all tend to swing towards one or the other as the situation demands.

Now I can see that the best path is somewhere in the middle, each tempering the shortcomings of the other.

However, a lot of problems today I see are because people are too invested in one of the attitudes or the other. But it has to be said the it’s the overly Romantic we see most of all. Too much passion and not enough reason. It’s because the emotional path is quicker and easier, rather than the harder, slower rational one.

I have learned that both Romantic and Classical attitudes have important truths to impart and a good life requires the wiser path of adopting elements of both.

Seek the middle way, by never forgetting the opposite attitude.